Review of 'Burnt Worlds' on ManyBooks

I'm delighted to report that Burnt Worlds has been reviewed by ManyBooks, who had some nice things to say.
Their review can be found here:
ManyBooks review of 'Burnt Worlds'
In order to mark the occasion, the e-book of Burnt Worlds is currently available for free on Amazon, and will be for the entire long weekend!
In other news, the latest book (Alliances, the third book in the 'Hybrid' series) is almost ready to go.  I'm standing by for a last few edits, and if all goes well it'll be out in August.  Yay!
Posted by Steve at 9:54 AM No comments: 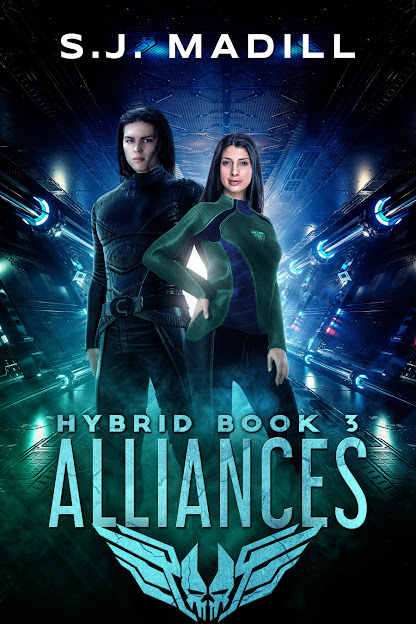 It came out of nowhere

Here at the Madill compound, spring has appeared all of a sudden.  Last weekend it snowed, which I thought was a bit disrespectful.  This weekend, it's somewhere around 27C (that's 81F or thereabouts) and absolutely glorious.  There have been no apologies for last weekend's wintry nonsense.

I'm happy to report that the third book in the 'Hybrid' series (currently called Hybrid #3; catchy, huh?) is off to visit the Readers Of The Apopsicle.  It's already been through three edits/rewrites/beatings, and there are still a couple chapters that need another visit from the red pen.

The middle book of the last series (Loyalties) felt the same as this new one does:  it's the middle of the series, so it doesn't so much finish plot threads as it does set pieces in motion for what happens next.

Zura, for her part, would say that this newest book is mostly about people trying to distract and irritate her as much as possible.  She's not wrong.

Also, for the person who asked, another familiar face from the 'Borealis' series does indeed stop by, and they have an agenda of their own.  But more on that later.

In fairly short order, the world has turned upside down.  Human civilization has ground to a halt while efforts are focused on dealing with a pandemic.  It's a bit like a science-fiction story, apart from the bit about it not being a story.

Like a lot of stories, it does have heroes.  So that's good.  But it's not a single take-charge-and-fix-everything hero like the type that wears a colourful suit and can fly (and/or leap tall buildings in a single bound).  Our very real heroes number in the thousands, and many of them wear scrubs and lab coats (and lots of masks and gloves).

While the professionals are working their butts off to get us through this, many of the rest of us are sitting tight and trying not to make things worse.  For some of us, that might mean feeling like we have too much time on our hands.

In that case, I'd humbly recommend some sort of creative project.  Writing (obviously), painting, knitting, sewing, carpentry, gardening, that sort of thing.  Or, you know, you could try your hand at video editing.  Like the inspired genius who did a remix of our Prime Minister mis-speaking a word during his daily televised address.  Having a project can help distract us for a little while, and maybe give focus to an otherwise unproductive day.

In time, we'll be on the other side of this, and humanity will find a new version of 'normal'.  I don't know exactly what that'll look like, but I'm hoping we'll finally get flying cars.


P.S.  In less-important news, Book 3 is going through its second round of edits & rewrites.  In a few weeks, I hope to get it out to the Readers Of The Apopsicle for them to look at and/or throw stones at it.

Try soaking it with vinegar, then blot with a damp cloth.

Here in the Great White North, we're safely into the month of March.  I've heard that the other, less awesome, parts of the world aren't too far behind.

After three months of snow, ice, and precious little sunlight, winter has lost much of its initial charm.  Now that it's March, we can finally hope for spring.

And then, of course, the universe will see us being hopeful, say "nuh uh", and dump more snow on us.  Because that's how these things work.

While more white nonsense falls from the sky, I've been working on the next book.  The third book in the 'Hybrid' series doesn't have a name yet; I'm referring to it by the compelling and exciting name of 'Hybrid 3'.

The first draft of 'Hybrid 3' is done, and I'm well into my initial editing pass.  It's bigger than the first two books: over 90k words, compared to the 70k of the other two.

Since it's the third book in a five (or six?) book series, there's a lot going on.  We're getting to know characters, and events are starting to move on their own.  There's even a little bit of 'old meets new' that happens.

I'm hoping to shorten the time between books, but we'll see.  It only takes one zombie apocalypse to throw off the schedule.  And no one ever thinks about the cleanup afterward; zombie stains are hell to get out of carpet.


Not to put too fine a point on it, my search history is a mess.

From what I've learned from other authors, this is a fairly common problem.  When we're working on a book, we find ourselves searching all kinds of weird stuff.  The kind of stuff that normal, right-thinking people don't search for.  The kind of stuff that makes the RCMP (or insert your local 'we-see-what-you-did-there' government agency) start taking notes.

In no particular order, here are some of the things that have permanently messed up my search history:

Haemocyanin:  blood that is copper-based instead of iron-based.  Found in certain species of creatures with very low body temperatures like crawfish, cuttlefish, and maybe some aliens.

Tetrahymena thermophilia:  a species of bacteria with seven biologic sexes.  Because I needed to know about this sort of thing.

White opera gloves:  back when I was writing Burnt Worlds, I played with making my own cover.  My initial version was a 'still life' of a pair of long white gloves laid on the desk in the captain's cabin, so I ordered a pair to take pictures and do some digital compositing.  I absolutely did not try them on.  On an unrelated note, they make it difficult to type.


Gamma ray burst:  when something big (like the Sun, or maybe a black hole) farts out a beam of radiation that could totally screw up all life on a planet in the line of fire.  Because, you know, these things happen.

Gerd von Rundstedt:  after WW2, what happened to the German military leaders?  During the war they were household names, in some cases feared or respected.  Assuming they weren't implicated in atrocities, some of them got to live out their lives in relative freedom.  That means they were someone's neighbour.  The thought of a cranky old generalfeldmarschall moving in next door was an image that stuck in my head.

Total Existence Failure:  supposedly, under some advanced theoretical physics its possible for quantum-level particles to wink in and out of existence at random.  That being the case, it is theoretically possible for an entire object to suddenly just fail to exist any more.  It's far-fetched, but it does explain what happened to my car keys.  I mean, they were right there a moment ago.

Rate of topsoil accumulation:  if I drop something in the dirt, in 500 years how deep will it be buried?  You know, in case I need to dig it up later.

Cadaver storage temperature:  I need to know this.  Because reasons.

So imagine having all this sort of nonsense in your search history, and then trying to search for something sensible.

It's a holiday miracle!  (well, maybe not a miracle, but I'm still happy about it...)  The second book in the Hybrid series is now available on Amazon.

Ten years after the events of Blue Guardian, the precocious youngster Yaella has grown into a strong-willed young adult.  She's just graduated university, and has a vision of buying a ship with her friends and exploring the galaxy.

Her mother, the fearsome Mahasa Varta, now oversees a network of human colonies developing across former Palani worlds.  Keeping tabs on a few million colonists is as much a challenge as keeping tabs on her independent-minded daughter.

For eight centuries, Mahasa (General) Zura Varta led the forces of the Palani Empire, gaining a reputation for ruthlessness.  Now she is the Governor of the Outer Frontier Territories, overseeing dozens of new human colonies on former Palani worlds.

As the Mahasa’s adopted daughter, Yaella grew up in a world of discipline and order.  Newly graduated from university, the impetuous young woman dreams of a life travelling the stars.  With her friends Tal and Bucky, she wants to buy a ship and go into business.

But Palani-Human hybrids like Yaella aren’t welcome in some areas of the galaxy.  In other areas they’re sought after… for the wrong reasons.


New parts of the galaxy will continue to be explored.  We'll meet new friends, and maybe catch a glimpse of some familiar faces from long ago.  I hope you enjoy Coreward, and will continue on this new adventure!


In the meantime, I've deep into the first draft of Book 3 in the series, which doesn't yet have a name.  Book 4 has an outline, and Book 5 (and potentially 6) are quietly forming in the ether.

Thank you for your continued support!  I hope 2020 brings you peace.  And cookies.