I'm happy to share the final cover art for Loyalties.  This will be the third book in the story of HMCS Borealis. 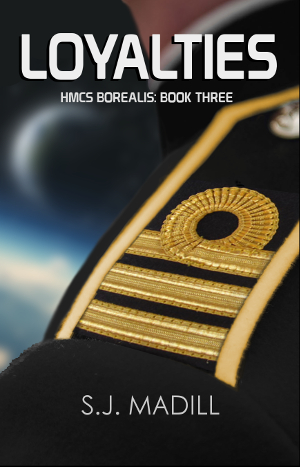 Loyalties is still on schedule, aiming for release in February 2017.  I'll post a summary shortly but, for those who have asked, some favourite characters will definitely be returning.

A busy year ahead

2017 has arrived.  It still looks like a science-fiction sort of number, like it ought to be far in the future somewhere.  We were supposed to have flying cars by now.

Things have been very busy for me.  In addition to the holidays, I have started packing in anticipation of moving house by the end of March.  It's astonishing how much stuff one can accumulate just by living in the same place for a few years.

Nevertheless, I still anticipate being able to publish Loyalties by the end of February.  After that, I'll settle into my new place and then get down to work.  I intend to have the fourth Borealis book out later this year, and hopefully the fifth (and final) book as well.

Best wishes to everyone for a great new year!