Where did it go?

December is almost at an end, and the new year approaches.  I'm not sure where it all went, but it was moving at a hell of a speed as it went by.

Early next year, a new story will begin with the start of a new series.  The fourth (fifth?) draft of the first book is making the rounds of the Readers of the Apopsicle, and I'm still fussing over the outline for the rest of the series.  If all goes well, I'll release the first book into the wild in the next several months.

Until then, I wish you and yours the best for the new year.  Here's hoping 2022 is the year we finally get flying cars.  And personal spaceships.  And alien sidekicks.  And adventures on far-off worlds.

The Joy of Rural Internet

Despite what you might have heard, life in the countryside isn't all glitz and glamour(1).  There are some down sides that aren't spoken of at art galleries, ballet recitals, and costume balls.

Chief among these, I have currently decided, is the internet.

For those living in the countryside's many quaint towns and villages(2), they have all the bandwidth they could want.  Too many gigabits to count; a veritable firehose of streaming, shopping, and pictures of cats.

But for those living in the no-man's-land between towns, the blasted hellscape of the side road(3), things couldn't be more different.  Corroded copper wires dangle between teetering poles, and only a few paltry megabits seep through the ancient circuits.

The legacy phone company, who have been here since the Sun was formed(4), boast of speeds up to 5 Mbps.  When 1.6 Mbps manages to leak out the end, they've done their part, and the rural dwellers pay handsomely for the privilege.

So when the phone company happened to let slip that a new service was available, you can imagine our excitement.  Using a network of towers dotted across the countryside (like cell-phone towers, apparently, and yet different), speeds up to a dizzying 25 Mbps were promised.

Installation went ahead, and we were amazed at the speed of this new... oh, wait, it stopped working.  Okay, it's back up.  No, it's down again.(5)

Apparently, the towers 'dotted across the countryside' were in fact all built in a straight line on our road, and the antenna they installed here at the Compound could see half a dozen of them at the same time.  As it was explained to me, the towers were arguing over which one was going to connect to us, and as a result the connection was up and down like a toilet seat(6).  No matter, they said, they'll fix it.

After a week of fruitless attempts to fix it, everyone gave up and we asked to be moved back to the previous 1.6 Mbps service that at least managed to stay up.  This was easily taken care of, and only took two weeks of daily phone calls, technician visits where no one showed up, more phone calls, confused admissions that "we're not sure why it's not working" and assurances that "it's fixed in the system" and that everything would be fine by morning(7).  Which it wasn't.

Which is all a long way of saying that I didn't have an internet connection for the second half of October, and I'm really behind on responding to email.

In other news, I've just finished the second draft of the next book.  New characters, new locations, new story, same universe.  Because I think even one universe provides plenty of room for stuff.

I'm now about 65000 words into the first draft of the next book.  It's the beginning of a new series, set in a remote corner of the galaxy.  Not that galaxies have corners, as such.  Anywho.

The new story starts in a quiet area of space, as the main character sets out in search of... well, they weren't looking for adventure, that's for sure.  But sometimes life doesn't quite go the way we planned.

The Story So Far:

Crusades, the fourth and final book in the 'Hybrid' series, is now available!

The story of Zura and Yaella, which started with Blue Guardian, comes to a head in the final book of the series.

Crusades follows quickly after the events of Alliances.  We rejoin Yaella in her quest to find the abducted Hybrids, as Zura fights to keep political events from spiralling out of control.

"It is time to do what's necessary."

Across Human space, national governments squabble over resources, borders, and the millions of refugees from an evacuated Earth. In Palani space, the members of the Pentarch Council continue their centuries-old political games of scheming, deceit, and assassination.

Lifelong soldier Mahasa Zura Varta tries to stand apart from it all, governing her outlying sector while the infighting and animosity comes to a boil all around her.

Meanwhile, Zura's adoptive daughter Yaella returns to deep space, following the trail of Palani-Human hybrids being abducted and taken coreward. She's in over her head, but isn't going to let that stop her.

The galaxy's balance of power is upended, and an ancient empire edges toward chaos. Somewhere near the galactic centre, beyond dead worlds and a dreadnought of wrecked ships, a mysterious race called the 'Union' lies at the heart of everything.

Corporations, religions, and good intentions: corruption can infect them all. Who will do what needs to be done?

Universal Link (takes you to Crusades in your local Amazon store):

I hope you've enjoyed the series, and hope you have fun as it all comes together.  Or comes apart.

This series has been a lot of fun, and I've had a great time getting to know the characters.  While the spotlight might move away from them, it's very possible that we'll be checking in on them in the future.

A quick update on what's going on around here book-wise:

Crusades, the fourth and last book of the 'Hybrid' series, is almost done making the rounds of the Readers of the Apopsicle.  There was a mountain of excellent feedback, and almost all of it was easily-fixed stuff like continuity or clarification.  I'm currently hoping to have the book ready to go by early July.  Yay!

In other news, I've made a lot of progress on mapping out the next series.  It doesn't have a name yet, but I've got some ideas about that, too.  The current plan is to set it in the same 'universe' as my other books, but in a different time and place.  I'm enjoying the way that the idea for the series grew out of something one of the characters says in Crusades which fired up my imagination.  I love it when that happens.

June is right around the corner!  Hopefully this summer will see us all on the road to normalcy, even though the idea of 'normal' might have changed a bit.

I’ve recently finished the fourth draft of 'Crusades', the fourth and last book in the 'Hybrid' series.  With each draft, the book has been shrinking:  the first draft was 159k words, and now it’s down to about 129k.  At that rate, the 15th draft will fit on a bumper sticker.

There comes a point when I realise I’ve been staring at the same words for so long that I need to step back and let other eyes look at it.  To do that, I’ve just forwarded copies to the greatly-esteemed Readers Of The Apopsicle, in hopes of being given the benefit of their opinions and insight.

While I await Apopsicle feedback, I’m compiling stacks of ideas for the next series.  I’ve got some character ideas, some plot ideas, and some random weirdness all starting to come together.  There’s a lot more work to be done before I even think about starting the first book, but so far so good.

Here in the lovely Canadian countryside, winter is determined to give us one last kick in the head before it leaves and sulks for six months.  Last week it was sunny and 20+C during the day, and today it’s snowing with a high of -3C.  It’d be great if the weather (and the universe in general) were to just settle down and be sensible for a while.  Not much chance of that, eh?

I'm knee-deep in the first round of edits for 'Crusades', the fourth and last book in the 'Hybrid' series.  As I've mentioned before, this book is twice the size of any of the previous books, so each step of the process is taking about twice as long.

While I hammer away at that, the final cover art has arrived.  It's a great cover for the book, and I think the whole thing's going to be a fun adventure to finish off the series. 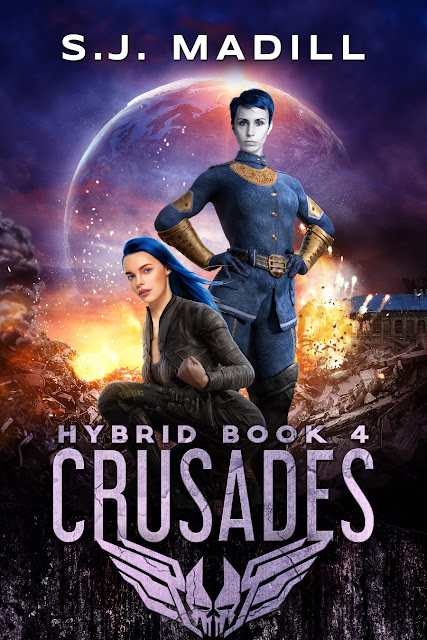 In the meantime, ideas are starting to coalesce into the front-runner candidates for the story I start next.  Most of the ideas are centred in the same universe, either close to previous events or far, far away.  There are some fun characters that are taking shape, and some very nifty ideas to get the story rolling.

Back in the real world, March has arrived and winter's grip on the land is starting to slip.  I hope everything's awesome where you are, and that everyone's staying safe and healthy.

Happy New Year!  At last, 2020 is in the past.  When last year started I thought for sure it would be the year that we solve our problems and finally get flying cars.  Didn't quite turn out that way.

I'm happy to report a bit of news:  after a few weeks of obsession intense focus, I've finished the first draft of 'Crusades', the fourth book in the 'Hybrid' series.  It's hefty.

At 160k words, it's almost twice the size of any other book I've written so far.  It will almost certainly shrink during editing, but depending on the final size I still might break it into two books that I publish one right after the other.  That also depends on finding a reasonable place to break the story, without just stopping mid-sentence with a "To Be Continued..."  No one likes it when stories do that.

This book finishes the 'Hybrid' series, and quite a lot happens.  I don't want to spoil anything (because spoiling my own book would be silly), but Yaella might do something without thinking it through and Zura might be irritated by something.  The book is going to be called 'Crusades', though at one point I gave a file the working title of 'For Crying Out Loud, Now What?'.

The cover art is already underway.  It's gone through two revisions, and I think it's just about done.  Once it's finalised, I'll come back here and share it.