I've just got back from a "four-day intensive editing workshop".  Which is to say, I spent a long weekend with one of the Four Readers of the Apocalypse.  There were caffeinated beverages, late nights, a chameleon, and chips (which are a proper meal, I don't care what anyone says).

During all that, I received a mountain of feedback about the third Borealis book, which I'm giving the title of Loyalties.  Two of the Readers of the Apocalypse (RotA) have now provided their initial thoughts, and I'm going to start editing while the RotA continue to comment as their time permits.

My current goal is to have Loyalties published no later than February 2017, with the fourth and fifth Borealis books to follow later in 2017 if all goes well.

After a bit of a marathon over the weekend, I've finished up the first draft for the third Borealis book, following on from Burnt Worlds and Chosen.  I very much enjoyed writing it.  My favourite days are when I sit down in the morning with a cup of tea and pick up my pen, and the next thing I know it's dark, my tea is cold, and I suddenly have twenty or thirty pages of scribbled hieroglyphics.

This third book will be the middle of the Borealis series, and characters not seen in Chosen have returned.  War rages through human space and, without giving anything away, things aren't going well at all for some people.

I'm going to spend the rest of this month giving the draft an edit; there are some scenes I already know are going to get changed, and others that will be added.  When all that's done, I will be summoning the Four Readers of the Apocalypse to saddle up once again.

The Gathering of Moss, and lack thereof

Chosen has been out for a week now, and I'm happy to see that people are giving it a look.  I hope everyone enjoys it, and I look forward to any feedback that might come my way.

I took a week off (some of which was spent with the PS4 and No Man's Sky) and today I've found my pen and am back at work.

Scribbling continues on the first draft of the third Borealis book, picking up the story a few months after the end of Chosen.  I'm currently catching up with some friends who were busy elsewhere during the goings-on with the Elanasal Palani.

I'm happy to report that Chosen, my third book (and the second in the Borealis series) is now available on Amazon.

Set a year and a half after the events of Burnt Worlds, Chosen reunites us with Commander Dillon and the crew of HMCS Borealis.  Old friends return, new friends are met, and we visit some new and dangerous places.

I'm once again indebted to the people who help make this possible, most especially the Four Readers of the Apocalypse.  You know who you are, and you're awesome. 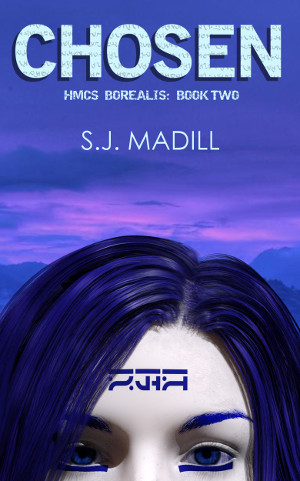 Commander Dillon and the crew of HMCS Borealis must find the Prophet.  But time is short, and fleets are already on the move.  And the Prophet has discovered more on Earth than he expected.
Posted by Steve at 3:05 PM No comments:

In the Home Stretch

With the thundering of hooves, the Four Readers of the Apocalypse have ridden through, leaving notes, comments, and tons of edits in their wake.  They've provided volumes of excellent feedback: everything from a comma in the wrong place to a ship in the wrong place.

It's also interesting to learn about my habits:  things I do while I'm writing that I don't even know I'm doing.  When I'm writing the first draft, I'm going just as fast as the ink will fly out of the pen, over the course of several weeks.  I might get the idea in my head that "this character needs to mention this thing", and I make a point of writing it in, only to learn that I already mentioned it ten chapters ago, which I wrote last week.  Spellcheck doesn't catch that sort of thing, only a sharp-eyed Reader of the Apocalypse will see it.

Having spent the last week editing and rewriting, I now have an Almost-Final draft.  I'm going to let it sit for a few days before giving it a final read.  A few last bits of polish, and it will be ready to go.

I've changed the title slightly: the sequel to Burnt Worlds will be known as Chosen.  In a few days I should have the final cover ready, and I'll put it here for a sneak peek.

Hoofbeats in the Distance

I've received some initial reports from the Four Readers Of The Apocalypse, and they seem to be enjoying Chosen One.  That's wonderful news, and I appreciate their ongoing work.  They're awesome.

Obviously, there will be stuff to be fixed.  I'm told that I've made a couple of amusing continuity errors, and there are a few things that will need to be explained.  I'm very much looking forward to hearing everything the Four Readers have to say.

In the meantime, I'm moving ahead with the third book in the series, that will come after Chosen One.  I don't have a name for it yet, but the first draft is underway.  Progress has been excellent so far, and I estimate I'm around 15-20% done.  Today I had one of those days when I sit down to write after lunch, and next thing I know it's dark out, my hand has cramped up, and I'm incredibly hungry.  I love days like that!

There are a couple new characters, a bunch of familiar faces, and a lot of interesting stuff going on.  Oh, and maybe an explosion or two.

The Four Readers of the Apocalypse

Fridays are good days to reach milestones.  It means people can slack off on the weekend and not feel guilty about it.

I'm happy to report that I've reached an important milestone with Chosen One, the sequel to Burnt Worlds.  The latest draft has been bundled up and sent out to my favourite pen-wielding bloodletters beta-readers, who have bravely volunteered to give it a look and provide their edits, suggestions and opinions.

I'm incredibly fortunate to have such excellent editorial assistance, from four people who approach the book from different directions.  I'm looking forward to hearing what the 'Four Readers of the Apocalypse' have to say.

The schedule in my head still says Q2 for Chosen One.  But I don't want to rush the Four Readers; I don't think any group with 'Apocalypse' in their name should be rushed or pestered.  So I'll start working on ideas for the next book in the series, and wait for the sounds of hooves outside my door.

As I did with the launch of Burnt Worlds, I'm making Magic Comes to Whiteport free for 72 hours.  It's my way of celebrating the book's launch, and it allows the book to introduce itself (and the people of Whiteport) to the world.

From midnight March 4th to midnight March 6th, Magic Comes to Whiteport will be free for download from Amazon.  I hope this will encourage people to give it a look!

I'm delighted to announce that my second book, Magic Comes to Whiteport, has now been published and is available on the Kindle store.

I owe a great many thanks to everyone who helped me over the past months.  Their suggestions, careful editing, and thoughtful analysis have been invaluable.

The CreateSpace process has begun, and hopefully a paperback version will accompany the e-book within a few weeks.

Here's a look at the cover, for which I am indebted to Lia Black.  She went above and beyond the call of duty to help me translate idea into image. 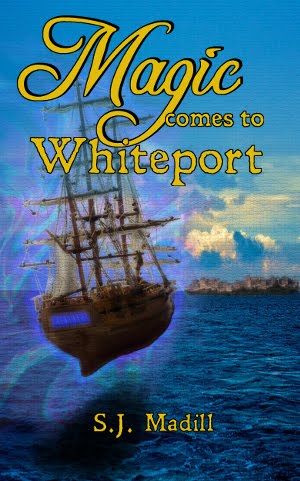 Word Of The Day

The practice of studying the entrails of dead or dying human sacrifices, especially in order to predict the future.  Also see anthropomancy.


Lia Black and I happened upon this spectacular word, while looking for something fun to do on a Saturday a different word.  We immediately recognised it as vital information that needs to be shared, for science and the good of humanity.

See if you can use this in conversation.  People will be so alarmed impressed!

I'm very pleased to report that the first draft of book #3, the sequel to Burnt Worlds, is done.  I finished it last night, and I'm happy with how it turned out.

Now, I'll send it into the corner to think about what it's done.  I'm going to return to it in a month or two, so that I can look at it with a fresh brain.

In the meantime, I'm going to start the editing process for book #2 (MCtW).  I've got a stack of fantastic feedback from four tremendous humans.  I like how they give totally different types of feedback about totally different things.  One has an eye for character development, one is watching word choices, that sort of thing.  It really helps.

So that's what I'll be doing next.  My schedule is unchanged:  I want to have #2 ready by the end of Q1, and #3 by the end of Q2.  That still looks entirely do-able, barring anything unexpected like a zombie invasion, or getting probed by aliens; that sort of thing.