George Bernard Shaw said that Britain and America were two countries separated by a common language.  Or something like that, anyway.  I've also seen versions of that quote attributed to Oscar Wilde or Sir Winston Churchill.  Okay, so maybe a lot of people have said it, but I wasn't one of them.

There are a number of differences between the version of English used in the United States, and the versions used everywhere else.  I've seen the 'everywhere else' versions called 'Oxford English', or 'British English', or 'Commonwealth English'.  Canada's version of English is a bit of a mash of both American and Commonwealth, because of course it is.

Because so many people weren't wondering what the main differences are, I thought it would be helpful to take a moment to explain one of these differences.  You could use this handy information to correct your professor/teacher/nurse when they get it wrong.  Before long, you'll be ignored celebrated for your brilliance!

Many of the words that end in -ize/-ise came from the French language.  While William the Conqueror is often credited/blamed for bringing French to England, we know for a fact that French people were already in England at the time of King Arthur. 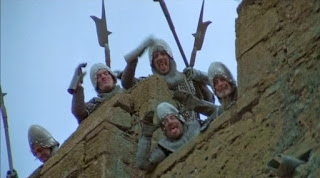 Your mother was a hamster, and your father smelled of elderberries.

In the US, most of these French-originated words end with -ize.  Elsewhere, the -ise ending is permitted, or even preferred.  It has to do with the stolen French words having been verbs ending in the suffix '-iser', which in turn had their origins with the Greek suffix '-izo'.  Something like that.  Both sides are convinced that their preferred version is more correct, and that the other side is a bunch of uncivilized poopyheads.

Examples of words affected by the -ize/-ise fiasco are:


There are a few words that are always -ise in all versions of English:


There is at least one word that is always -ize in all versions of English:


Also, there are related words that make a similar switch, between -yze/-yse:


And, of course, there are some words for which the -ize/-ise thing doesn't apply at all:


It would probably be best to memorize all this, in case there's a snap quiz.

Stay tuned for some undetermined time in the future, when we'll explore another of the quirky little things that helps English remain virtually unlearnable to others.

Here are some websites featuring people who know what they're talking about: