Realm of Elinth, the fourth book in the story of HMCS Borealis, is out with the Readers Of The Apocalypse for some final edits and comments.  I'm looking forward to seeing what they have to say.

In the meantime, it gives me some time to take care of another project I've been working on.  My fantasy book from last year, previously titled Magic Comes to Whiteport, has been given a new title and a new cover! 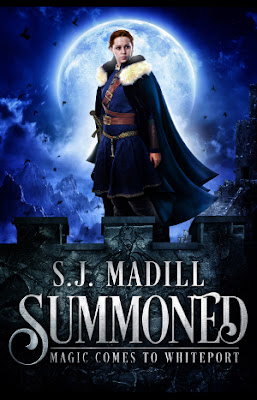 Summoned is now available on Amazon.  I'm delighted with how the cover has turned out.  The great people at Deranged Doctor Design have done a fantastic job of bringing Katryn to life.  Well, not 'life' per se, because... well, necromancy complicates things.

Here's a teaser for Summoned:

Something's wrong with magic. Powerful artifacts are vanishing. Magical gear can't be trusted. Spells are failing. Without magic, the Empire will collapse.

Katryn Windhelm was murdered. Now she comes to Whiteport set on revenge against its lord, who ordered her family killed. With her is Donza, the necromancer who gave her new 'life' after death.

The Nick is the greatest thief in the western Empire. He's inherited his mother's title and magical gear, making his life of burglary an easy one. But then a ring failed, and a job went wrong.

Anson the knight has spent her life protecting her lord, who has powerful Seer abilities beyond his control. Along with her apprentice Howe, she must shepherd her tormented master toward the destiny he has foreseen.

Three paths in pursuit of revenge, artifacts, and magic. All paths leading to Whiteport, the city on the sea.